FORT WAYNE, Ind. (ADAMS) – The Office of the Allen County Prosecuting Attorney says it has completed its review of the investigation surrounding the police action shooting that occurred on July 15, 2019, near Gateway Plaza, in Fort Wayne, Indiana, which caused injury to Noah Busche. The shooting investigation was completed by the Fort Wayne Police Department and the Indiana State Police.

Karen Richard’s office released a statement saying that it has “determined that there is no evidence of criminal liability in this incident, and therefore no charges will be filed against the officer involved.”

Karen Richard’s office said it has no further comment as the criminal case involving Noah Busche is still pending and that he is presumed innocent until proven guilty.

UPDATE (July 17, 2019):
FORT WAYNE, Ind. (ADAMS) – We now know who was involved in Monday’s officer-involved shooting in Fort Wayne, but we still don’t know why the officer started shooting. Fort Wayne police identified 19-year-old Noah Busche as the man who was shot. The PD also identified Officer Jason Fuhrman as the one who pulled the trigger. Police will only say that Busche’s actions ’caused an officer to discharge his firearm.’ No one is saying what those actions were.

Officials with the Fort Wayne Police Department released the following on Tuesday afternoon:

FORT WAYNE, Ind. (ADAMS) – Fort Wayne police are not saying what led to an officer-involved shooting that sent the victim to the hospital. Fort Wayne officials will only say that the ‘actions of the suspect caused an officer to discharge his firearm’ last night after a chase on the city’s near-northwest side.

On July 15, 2019, at 9:50 pm, the Fort Wayne Police Department received a report of a male armed with a handgun acting suspiciously in the rear of Gateway Plaza, 1500 Goshen Ave. Officers arrived and confronted the armed adult male. The adult male fled westbound towards the 2800 block of Cambridge Blvd, and a foot pursuit ensued. During the foot pursuit, the actions of the suspect caused an officer to discharge his firearm, striking the adult male.

Officers began first aid on the suspect until paramedics arrived and transported the male to the hospital in non-life-threatening condition.

No officers were injured, and there are no outstanding suspects. No other persons were involved.

The involved officer will be placed on standard administrative leave to cope with the stress of the incident and to allow the department time to investigate to make sure all policies and procedures were followed. The involved officer and any witness officers will be interviewed over the next few days.

The suspect will also be interviewed once released from the hospital. 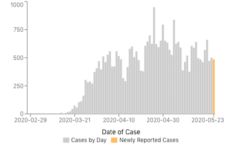 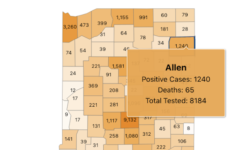 One person killed in house fire southwest of downtown→ 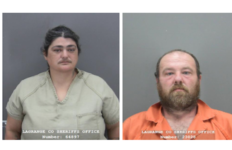