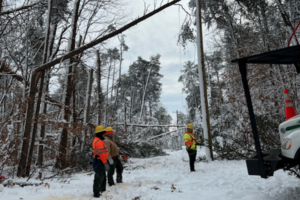 Representatives say that across Rappahannock’s three districts, the cooperative still has 45,365 members without power as of this morning.

Northeastern REMC released the following pictures of their ongoing efforts to restore power:

COLUMBIA CITY, Ind. (ADAMS) – Northeastern REMC was one of ten Indiana electric cooperatives to send crews and equipment to help restore power in Virginia after a devastating winter storm moved through on Monday. More than 85,0000 people were left cold and in the dark after the power system sustained major damage.

NREMC joined more than 30 additional lineworkers from across Indiana on Monday as they left for Rappahannock Electric Cooperative in Culpeper, Virginia.

Monday’s snowstorm brought up to 12 inches of heavy, wet snow to Virginia along with high winds. The local co-op in Virginia serves close to 170,000 people in 22 counties, and when Northeastern Crews arrived yesterday, over 72,000 members were still without power. Crews will be working 18-hour staggered shifts around the clock, but the restoration effort is still expected to last at least a week. In addition, restoration efforts will be challenging due to the expected below-freezing temperatures this week.

“With that many people without power, we knew that additional crews and bucket trucks were needed to help speed up the efforts to restore power, and we got them there as quickly as we could.” said Jim Eitsert, Vice President of Distribution Services at NREMC. “We know the group we sent to Virginia will work hard to help wherever they’re needed.”

Electric co-ops in Indiana, like NREMC, belong to a network of hundreds of other co-ops around the country that assist with storms or other events that result in significant power outages. Several hundred employees from Ohio, Missouri, Georgia, and Florida will also be joining the restoration efforts to bring power back online as soon as possible.

“If a storm caused severe damage to our area, we know we’d have hundreds of lineworkers headed our way too,” Eitsert added.

According to Rappahannock Electric Cooperative’s website on Wednesday morning, they were able to reduce the number of people affected by power outages to 59,000 and have more than 1,000 workers in the field working together to bring power back to Virginia. 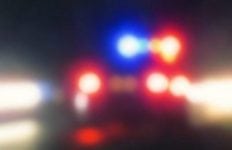 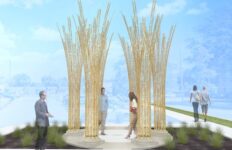 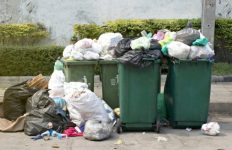