– Babies have around 300 bones at birth.  Eventually those bones fuse to the standard 206.

–“The Departed” is the only remake that’s ever won an Oscar for Best Picture.

– Of the famous “57 Varieties” of products that Heinz originally made, ketchup was 43rd.

– From 1948 to 1975, there was a federal holiday on the second Monday of August called Victory Day, to celebrate Japan surrendering in World War Two.  It was abolished in 1975, but one state still celebrates it . . . Rhode Island.

– Rick Moranis was the first pick to be Ace Ventura . . . but he turned it down, so it went to Jim Carrey.

– A single dad in Texas sent photos to his daughter last week for advice on what shirt to wear for a date.  The date stood him up . . . but his daughter tweeted the photos and they’re going viral.  So now, apparently, he’s been getting a ton of offers for dates.  (Full Story)

– Only one in five offices in the U.S. still have a strict dress code, according to a new survey.  And half are now casual or business casual.  (Full Story)

– A guy in Belgium just set a Guinness World Record for sitting on a TOILET for 116 consecutive hours.  The biggest challenge is you can’t sleep . . . but you can stand up for five minutes every hour to stretch.  (Full Story)

– A strip club in Ohio is giving away all of its old couches.  They’re FREE . . . but the club is warning people the couches, quote, “may have stains [from] unknown bodily fluids.  Use at your own risk.”  (Full Story)

– Last week, word got out that Taco Bell was experiencing a TORTILLA SHORTAGE because of some issues with their suppliers.  Well, we’re happy to report everything is resolved.  (Full Story)

– For some reason, the latest viral trend is . . . stapling pieces of bread to trees.  There’s even an entire community devoted to the trend on Reddit . . . with more than 200,000 members.  (Full Story)

– According to Wallet Hub, the most stressed-out cities this year are Detroit, Cleveland, Newark, Baltimore, and Philadelphia.  (Full Story)

– Moms spend more than 1,400 HOURS worrying about their baby during the first year, according to a new survey.  That’s more than eight entire weeks.  (Full Story)

– A 36-year-old guy in the Florida Keys took his wife to a strip club over the weekend.  Then he flipped out when the strippers pulled her up on stage, and she went along with it.  They ended up arguing in the parking lot, and he punched a random guy who stopped to see if she was okay.  Now he’s facing battery charges.  (Full Story)

– A woman in Missouri had her SUV stolen last week.  So she monitored how the thieves were using her credit cards inside . . . and eventually tracked them down at an Applebee’s and stole back her car.  Then she called the cops, and the thieves were arrested.  (Full Story)

– A guy was pulled over in New York for speeding last week.  And . . . the cop found 179 POUNDS of marijuana in his minivan.  He was arrested on two felony counts.  (Full Story)

– Two guys in Wisconsin got into a fight at a mall food court last week . . . which turned into them attacking each other with tiki torches.  One of them ran off before the cops came . . . the other one was arrested for disorderly conduct and criminal damage to property.  (Full Story)

– A military mom in York, Pennsylvania got to throw out the first pitch at a minor league baseball game last week.  Then the catcher took off his mask, and it was her SON, who’d just gotten home after two years overseas.  (Full Story) 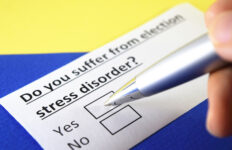 1 in 7 Americans Will Drink Liquor on Election Night→

The 10 Halloween Candies with the Highest “Trade Value”→