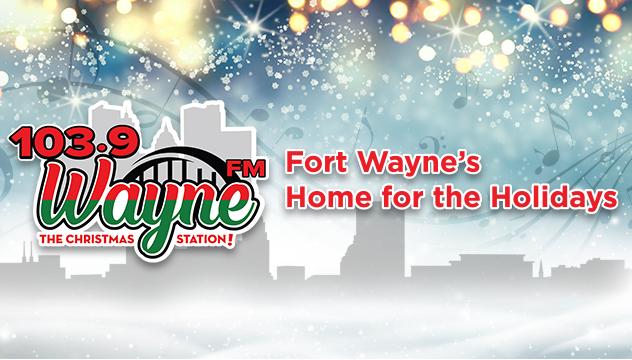 103.9 WAYNE FM FLIPS THE SWITCH TO ALL CHRISTMAS MUSIC

103.9 Wayne FM will play festive Christmas tunes around the clock thru Christmas Day from classic artists like Bing Crosby, Gene Autry, Frank Sinatra and Johnny Mathis, in addition to newer favorites from artists such as Michael Bublê, Pentatonix, Kelly Clarkson, and Lindsey Stirling.

The playlist is carefully curated and programmed locally in Fort Wayne by 103.9 Wayne FM Director of Programming, Rob Mack.

Mack says, “The e-mails, comments, messages and phone calls begin in late October, all asking when 103.9 Wayne FM will be playing Christmas music this year. With cold weather on the way this weekend, maybe even a few snowflakes, and displays going up at stores and all around town, we are ready to say it is Christmas in Fort Wayne!”

Mack added that the 103.9 Wayne FM format will resume as usual after Christmas. “We’ve had a lot of great response to our regular format over the past year and our unique mix of hits from the late 70’s all the way up to today’s music. No one else plays as many hit songs from as many different eras and styles as us. As we say, ‘We Play Everything!’, and we look forward to continuing to do that on December 26.”

Mack acknowledges that Christmas music this soon isn’t for everyone. “We’ll be here playing it when you’re ready for it this season, as we have for 8 years in a row.”