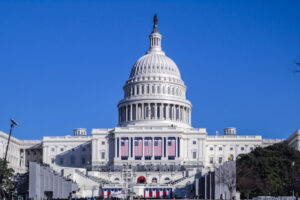 All eyes were on Washington, D.C. yesterday, as JOE BIDEN was sworn in as the 46th President of the United States.

Chances are, you caught at least some of it, but here’s a breakdown of the standout moments:

Fox News's Chris Wallace: "I thought it was a great speech … I thought this was the best inaugural address I have ever heard." pic.twitter.com/rOdTBNSmUm

The first three were done in front of reporters, and they were . . . his 100-day mask challenge, his support for underserved communities, and rejoining the Paris Climate Agreement.  (Here’s video.)

Trump DID leave a note, which Biden described as “very generous.”  He also said that since it was private, he wouldn’t talk about it publicly until talking with Trump.

The White House later said that Biden was being polite but didn’t have immediate plans to call Trump.  Which makes sense, if Trump wanted to talk to Biden, he had ample opportunity in the past few weeks . . . but obviously, he didn’t.  (Here’s video.)

(There are two other surviving presidents.  96-year-old Jimmy Carter, who was physically unable to attend.  And our 45th President, who was emotionally unable to make it.)

(New White House Press Secretary Jen Psaki gave her first briefing, and immediately announced that despite the pandemic, Biden had attracted “the largest audience EVER to witness an inauguration, period.”)

Just kidding . . . but that would’ve been something.

The Latest – NBC News: U.S. vaccinations moving ahead of time→